﻿﻿﻿﻿﻿﻿﻿﻿
The other day I was watching TV news and saw a report that indicated that some small amount of help was at last reaching ravaged Somalia. I was pleased to see this as I know how the inhabitants of that country have suffered for the last two decades and my work with the UN and EEC had given me direct experience of the first eight of those 20 years.


The suffering and misery of the Somali nation is unbearable yet there are many who say that the Somalis themselves are to blame for this although I do not take this viewpoint. Modern day Somalia was formed half a century ago in 1960 by the amalgamation of south Somalia, which had been ruled by the Italians, with British Somaliland in the north. It was not long before there were problems between the north and south of Somalia that resulted from cultural differences that had their origins in the social structure and development allowed under the two colonial powers. In the north schools had been set up following the British education system as did all legislation and administration. There was a relible medical service and a  good veterinary service although no British families had settled there while in the south many Italian families had settled in Mogadishu and other towns and the schools and establishments there were available to these settlers and a few elite Somali families.
However in 1974 Siad Barre decided to join the Arab League on the understanding that he received a substantial sum of dollars that naturally found its way into his accounts. At that time Somalia was comparatively well off because of its good agriculture and livestock industry and did not need the finances from the Arab League and Barre became part of the cold war between the East and the West, (as I explained before in Arabic). Joining the Arab League also resulted in a few projects that were funded by Iraq and Kuwait but these failed. However joining the Arab League opened up the country to Islamic fundamentalists who moved in firstly to teach the basis of Islam as the donors wished it to be taught and then to progress to the fundamentalism that we now see in this poor country.
As I said I was watching a news report and I was flabbergasted to see a bearded Algerian facing the camera and telling the journalist that his society had opened a school to teach Arabic to the Somalis as if the Somali people did not have a language! The Somali nation and the Somali language originated in five countries within East Africa and the language was, and is, understood in many countries within the region as the nomadic Somalis moves with their large herds of livestock across the East African range.
The idea of an Algerian going to Mogadishu to teach the locals Arabic was, to me, like a Turk or Iranian going to Halabja after the chemical massacre there to teach the survivors Turkish or Persian!
The Algerian wanted to teach the Somalis Arabic, but why? They are not Arabs and many Somalis find it insulting to be considered to be so. Somalia has its own language and culture and its people are very proud of their origins while the nation’s flag carry a five point star to symbolise the five countries where the Somali people originated. ﻿﻿
﻿﻿In early 1993 during the civil war I was stationed in Mogadishu in the UN’s FAO Office in the middle of Mogadishu. Next to our compound was a piece of wasteland on which was a Guri, (Somali hut) made of branches and this simple hut was the private local school for the surrounding community. Every day the children came to be taught by the lone teacher even in the midst of the civil strife. They wrote on flat wooden boards using sticks dipped in ‘ink’ they made each day by crushing charcoal to a powder and mixing it with okra sap then laboriously wrote verses from the Koran on their boards. Then one day a particularly heavy rainstorm caused a flood that washed away the Guri and the children had lost their school.
﻿﻿

A day or so later I went on home leave to the UK and took home photographs of Mogadishu, including the little school, as my wife had been asked to give a talk at the local primary school about life in Somalia. The little talk was well received then the following day there was a knock on our door and my wife opened the door to see 9 or 10 children holding out to her a hat in which was a collection of coins.  They proudly told her that they had collected the money to help the children in Mogadishu get a new school! The pennies these children had collected started the ball rolling and I took the story to the FAO staff association in Rome (FSA) who added 3,000US$ to the children’s pennies. In Mogadishu this paid for the construction of a new brick and cement schoolroom with a toilet facility to replace the guri. A generator was provided by the US services to allow a ceiling fan to be operated and some 100 children came every day to be taught by the teacher who now had an assistant.
The little school was a gesture of good will to the local community (That why I managed to live in the center of the town) and the children continued to learn the Koran and to read and write the Somali language. I sent back photographs to the staff association in Rome and a further sum of money was raised to provide T-shirts for the school’s pupils. I was honoured to cut the ribbon at the official opening of the school which featured in all the local newspapers and the Peace school as it became known was still flourishing two years later when the withdrawal of the USA staff from Mogadishu forced the UN to leave too.

Every day the children took off their flip-flop sandals before going into class and the assortment of battered rubber and plastic shoes would bake in the sun until the classes finished and the children poured out of the school’s door. Then, without any difficulty, each child found its rightful pair of sandals and trotted off home. It always puzzled me as to how faced with some 100 pairs of similar sandals, each child recognised their own and in two years I never saw an argument occur.
A generation later it seems Mogadishu has been given another school, one where the children will learn to read and write Arabic not Somali!
﻿﻿ ﻿﻿﻿﻿﻿﻿﻿ ﻿
﻿
﻿ 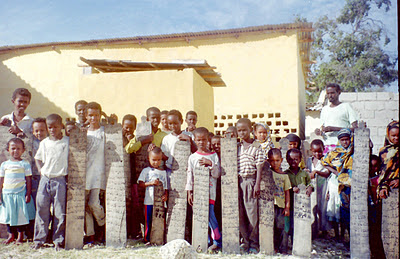 Posted by Talib Murad Elam at 4:31 AM