I live in an apartment in one of the government buildings in Al Zakaria. This is supposed to be a high security area yet every morning I find advertising leaflets have been left outside my door. This makes me wonder about the building’s security!
This morning (29.9.2011) there were two leaflets on the doormat, both for Turkish restaurants in Erbil and as I looked at these brightly coloured leaflets (hereunder) I realised that Turkish, English and Arabic were used to describe each restaurant and their menus but not a single Kurdish phrase was used! Just what is going on here? These are restaurants in Erbil the Capital of Kurdistan. Surely there should be legislation for the Kurdish language to be used in Kurdistan and if there is no legislation then steps should be taken to remedy the situation.
What these restaurants are doing is targeting the people who speak these foreign languages. Taking a closer look at the leaflets I saw that on one was the phrase “We serve the elite.”لعشاق الفخامه واللتميز "Does that mean the elite speak Turkish, English or Arabic but not Kurdish?
When I return to my family in Wales, UK every road sign, official paperwork, job advertisement etc. is in Welsh and English with many shops, restaurants etc using both languages when Wales is part of a country whose official language is English. 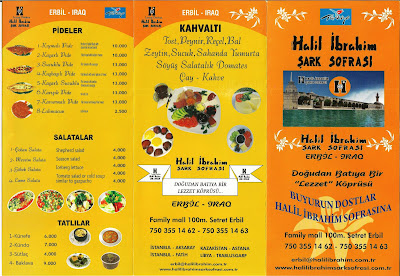 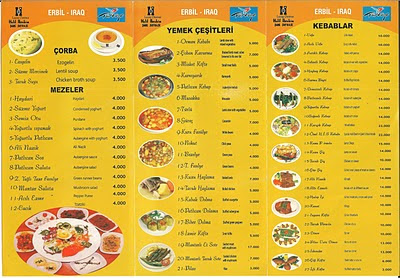 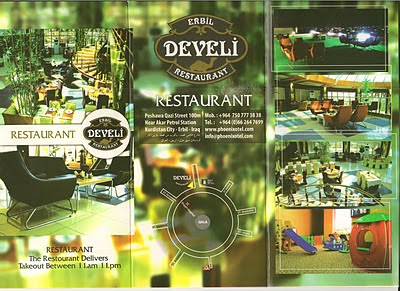 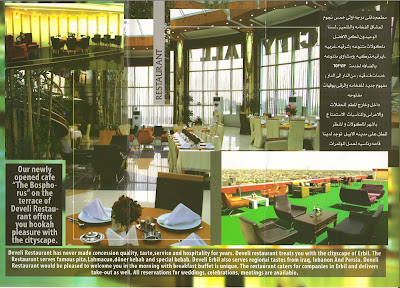 Posted by Talib Murad Elam at 1:26 AM No comments:

In 1971, like many of my colleagues on the staff of Sulymania University- Iraq, I was awarded a grant from the Calouste Gulbenkian Foundation for postgraduate studies at the Faculty of Veterinary Science, Liverpool University, U.K. The funding was only for 2 years but in order to obtain a Ph.D. in Veterinary Physiology a postgraduate student would need to spend at least 3 years studying and carrying out research. In order to obtain the extra money I needed to enable me to complete the requisite 3 years of study and pay for my accommodation in the university hostel I therefore had to work as a demonstrator in the university.
By the end of 1974 I had completed my research for the Ph.D. and I had submitted four abstract papers to the Physiological Society and these were accepted for publication. The preparation of these papers helped me tremendously in preparing the thesis and the viva I had with Prof. Robin Day of the Rowett Institute, Aberdeen was the shortest that recorded in the faculty. I regret that I did not attend my graduation day but frankly I could not afford the hire costs of the graduation gown that I was required to wear for the occasion.
When I was in Liverpool my father was killed by Saddam’s regime in a hit and run method of killing as he was walking to the mosque for early morning prayers on January 1st 1974.That was a bloody message from Saddam for my brother Adel who was head of the Kurdistan Student Union, but I was not made aware of my father's death until I graduated in March 1975.

I had learned from friends that in early April 1974 my family, including my mother and sister, dressed in their nightclothes, had been taken by Saddam’s security forces in the middle of the night from our home in Baghdad. Then a few days later the security forces looted the house taking anything of value and auctioning the rest. I later learned that it took my mother and sister, in the company of some twenty families of Baghdad Kurds, eight days to reach the northern border into Iran. On the eight days trip from Baghdad to the border they were twice threatened with death and another occasion only luck saved them in an attack by aircraft.
In Liverpool in April 1974 all I knew was that my family had been taken from our home in the middle of the night but I did not know where they were. Dianne and I kept in contact with the International Red Cross who tried to trace my family. I still have all the letters we received from the I.R.C. Then in June 1974 I received a letter from my sister explaining of what had happened and telling me that my family were safe in a refugee camp in Iran. My parents were illiterate and so my sister would write on their behalf and she wrote that she conveyed my father’s love to me. I was therefore not aware that he had been killed 6 months earlier. Apparently my mother and sister had decided to hide this from me on the understanding that receiving this devastating news would have a drastic effect on my studies, especially when I was financially distressed.  It took me years to forgive them for what they done. Now my son, Dana, is writing his Ph.D. thesis and I do not want him to be disturbed and this has finally made me fully accept the decision that my family took 36 years ago.
I had been encouraged by the Head of the Department to apply for a three years post-doctoral grant from the British Agriculture Research Council (ARC). In 1974 the increase of the price of the petrol by OPEC was reflected in all aspect of life in the world, including the budget of the ARC, and my application for the grant was turned down.
However I was given a small grant and laboratory access to do some post doctoral research and I obtained some minor work in the university that allowed me to earn my living. Most of my fellow Iraqi students in Liverpool were ready to return to Iraq and to take advantage from Saddam Hussein’s decree that allowed graduates a tax deduction on everything they took with them into Iraq. This was particularly advantageous with regard to expensive cars as some makes could carry import duties of over 100%. Whenever I had a bit of time to visit the student union in the university I used to see the Iraqi students with their Mercedes catalogues calculating and deducting their ‘earnings’ from Saddam’s handout. I was told that one particularly clever graduate took a large truck and a trailer full of furniture to the border where he was allowed to cross into Iraq. Why not? It was Saddam’s order that was being followed. That is how, Saddam started to buy the educated Iraqis as he filled their pockets and stimulated their greed.  I had nothing to do with that hullabaloo as I did not have any family in Iraq to return to and I could not afford to buy even a bicycle.
My finances went from worse to worse and I started to receive regular visits from an officer from Neston police station to remind me that my student visa was expired and I was not welcome in the U.K. anymore. The funny side of it was that the police man was always dressed in a tracksuit as apparently he used to jog and as he ran down the country lanes by the veterinary field station, he remembered poor Talib and dropped in to give him another warning. Now I compare when I was stuck with nowhere to go, receiving regular visits from a policeman dressed in a tracksuit, to the treatment meted out to others today by a U.K. with very relaxed immigration laws.
There is a silver lining for every cloud and one day in June or July the head of the Department of Clinical Studies, Prof. Fitzpatrick, asked to see me. He had just returned from a vacation during which he had attended the First World Veterinary Congress in Greece.  At this congress he had met Dr. Sagher, the non-veterinarian who had been appointed as dean of the newly established veterinary faculty in Tripoli University, Libya. Fitzpatrick suggested that I could work with Dr. Sagher  to establish this new faculty and I went to London to meet  Dr. Sagher who was visiting the U.K. He was pleased to see me, apparently he had had a glowing report about me from Fitzpatrick, and I became the first lecturer appointed to the Faculty of Veterinary Medicine at Tripoli University.
Around the same time the Patriotic Union of Kurdistan, PUK, was created under the leadership of Jalal Talabani in Damascus, so I decided to spend my few remaining pounds and go to Libya by way of Damascus.
Posted by Talib Murad Elam at 11:42 PM No comments: