Have you ever had the experience of feeling so passionate about an important issue that you fought for it? You thought that people fully agreed with you and that those around you agreed with you and supported you, or at lease were not opposing you. I and my family have supported a variety of good causes over the last thirty years only to find out, sooner or later, that many of the ‘supporters’ with us had cold feet about the cause. In four decades of work that took me to some of the most difficult postings I came across such situations time and again.
This reminds me of a story I heard when I was a child but I vividly remember it. As a young boy I thought it was a funny story told by an old man and I want to write it down somewhere as the time of storytelling has gone forever. This may be an old story yet it is still relevant in modern times and relevant to what we see and hear every day.
The story tells of a Sultan ruling a city state, he was a tyrant and feared by many and everything in the city belonged to the Sultan. As if that was not enough he had a big male elephant that he left to roam in the city where it created havoc. The biggest problems that the people of the city had resulted from the destruction the elephant caused to their houses, shops and market stalls. This went on for a long time without a murmur of complaint against the Sultan’s elephant. Who would even dare to whisper about the chaos the animal caused, or the damage to their homes and the destruction of their livelihood?
One day the most senior citizen in the city said, ‘Enough is enough! We have to inform the Sultan about the destruction caused by his elephant.” The few words of the old man echoed all through the city and hundreds of angry people came to the old man and surrounded him. He agreed to lead those that had gathered together to the Sultan’s palace to inform him about the mischief that the free roaming elephant was causing to the properties and livelihoods of the people. The old man set off for the Sultan’s palace walking ahead of over a hundred angry people. On arriving at the palace the old man knocked the palace gate demanding to meet the Sultan. To his surprise the Sultan came to the gate and asked him why he was disturbing his siesta. While the Sultan reprimanded the old man, the old man took a quick glance behind him at his followers but, to his surprise, there was no one behind him, he was alone facing the Sultan. He picked up some courage and started to tell the Sultan of his complaint. He started to speak, ”The Elephant  ”
“What is wrong with the elephant?” Interrupted the Sultan,
At this the old man lost his courage just as he had lost all his supporters, he said, “Your Highness, you must get a female elephant as a companion for your elephant so that we can have baby elephants around the city. That is what your citizens want and they have delegated me to tell you.”
How many of you reading this have, at sometime in your life, felt like the old man facing the Sultan alone.
Posted by Talib Murad Elam at 2:30 PM No comments:

Dad: By my daughter. 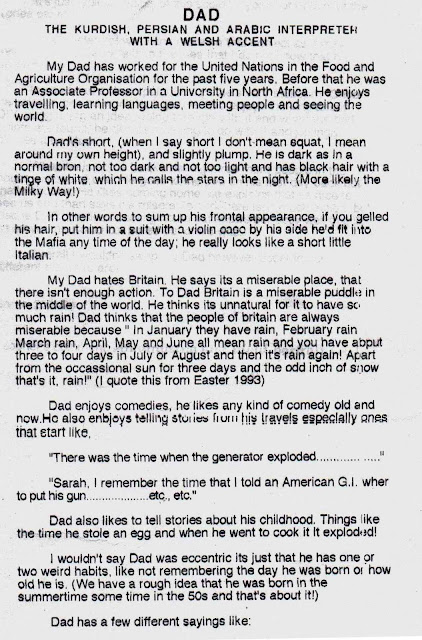 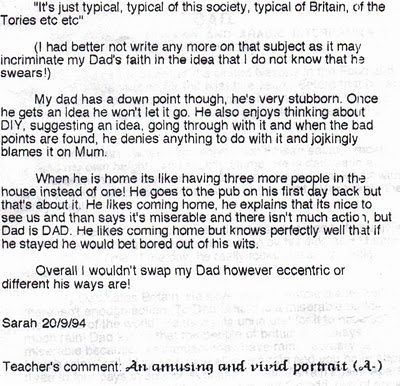 I was sorting out my filing cabinet and came across this essay that my daughter, Sarah, wrote when she was 14 years old. The teacher gave her an A Grade. I remember I was angry with her at the time as she 'was reading me'!﻿. Now I love it and that is why I would like to share it with others.
Talib
Posted by Talib Murad Elam at 11:59 AM 1 comment: