After a period working with FAO with the Somali nomads I moved on and in 1990 began working in Mogadishu with the EU funded, rinderpest (cattle plague) campaign. Our family home was a rented villa in K4, Mogadishu. The villa was in front of the Ministry of Agriculture and had a good sized garden where my children Dana and Sarah would be playing when I returned home each afternoon. 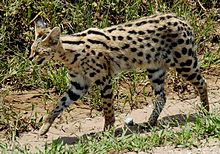 I was flabbergasted to see an article in the front page of Aharqalawsat   the most popular newspaper in the Middle East on Tuesday 12th, of July 2011. It seems the story was so great that it was repeated in the back page of the same journal.
Duhok zoo acquired two young crocodiles each was 125 cm long from Africa paying sixteen hundred US Dollars for the couple. It seems one died immediately on arrival and the other disappeared a week ago. The zoo management fails to report the disappearance of the second crocodile. The poor creature ended up in a building site in the center of the city and was killed immediately by a laborer. He told the reporter that he was about to be swallowed by the wild crocodile he had to fight and kill him. He thought he will be a celebrity in a country full of celebrities. The director of the Zoo was crossed because he has no more crocodiles in his miserable zoo.
This poor young croc was killed savagely by an ignorant man after disappeared from a zoo which obviously very badly managed. A young crocodile imported from a far away land to Kurdistan was brutally killed for no reason
On August 15th 2011 the Azzaman Daily reported that crocodiles in the Euphrates are feeding on dead human bodies. It appears that the Ministry of Environment in Baghdad had sent a mission led by Ali Allami to Diwaniah in order to investigate about this phenomenon as crocodiles have never been recorded in the Iraqi river yet last Tuesday police killed a crocodile in a stretch of the river near Diwaniah. No details of the condition of the animal were given and the media reported that a recreation park in Diwaniah had imported some young crocodiles from Egypt without licenses and these had escaped into the river. Again, as in the case in Duhock, the park authorities did not inform the authorities. The presence of the animals in this region of the Euphrates was discovered when police were searching for the bodies of people killed by kidnappers or terrorists, Although the criminals had confessed and given the police details of the location where they had thrown the bodies of their victims into the river all searches by the police for the victims had proved fruitless. Local people began to talk about crocodiles taking the bodies of the victims but idea was dismissed until the police killed the first crocodile in the Euphrates last Tuesday.
It is obvious that we need to stringently enforce laws on importation of live animals into the country, whether wild or domestic species, to safeguard the environment. However in Iraq we already have very large ‘crocodiles’ (Homo sapiens ‘crocodilius’) and no one dares to approach these!
Posted by Talib Murad Elam at 10:03 AM 2 comments: