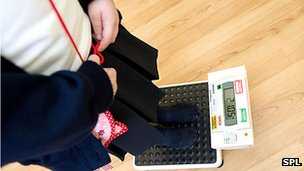 
The majority of NHS spending on diabetes is avoidable, says a report in the journal Diabetic Medicine.

It suggests that 80% of the NHS's £9.8bn annual UK diabetes bill goes on the cost of treating complications.

Experts say much of this is preventable with health checks and better education - something the Department of Health says it is tackling.

If this rise in diabetes is allowed to continue, it will simply be disastrous for NHS budgets”
End Quote Baroness Barbara Young Chief executive of Diabetes UK


There are 3.8 million people living with diabetes in the UK.

The study looked at annual direct patient care costs for both types of diabetes, with Type 2 at £8.8bn being far higher than that of Type 1 at £1bn.

Both Type 1 diabetes, which tends to appear in childhood, and Type 2 diabetes, often linked to diet, lead to problems controlling the amount of sugar in the blood.

Complications occur when people with diabetes sustain high levels of glucose over a long period. This can lead to increased chances of developing disease-related complications, such as kidney failure, nerve damage, damage to the retina, stroke and cardiovascular disease.

Baroness Barbara Young, from Diabetes UK - one of the charities involved in the Impact Diabetes report - said: "The report shows that without urgent action, the already huge sums of money spent on treating diabetes will rise to unsustainable levels that threaten to bankrupt the NHS.

"If this rise in diabetes is allowed to continue, as is happening at the moment, it will simply be disastrous for the NHS and wreck NHS budgets. I think we have a car crash coming.

"But the most shocking part of this report is the finding that almost four-fifths of NHS diabetes spending goes on treating complications that in many cases could have been prevented.

"That's hugely wasteful - in human life, in the quality of human life, and in NHS budgets. We need to stop this now and make sure people get the right sort of care early on in their condition."

Baroness Young speculated that investing in better education and more frequent health checks to reduce the risk of complications could actually be less expensive than the current approach. 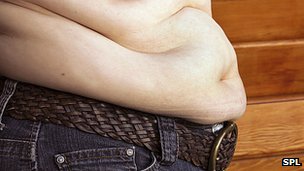 Type 2 diabetes is often linked to lifestyle and diet

She said: "We need to make sure... that we prevent people getting diabetes through good risk assessment and early diagnosis to prevent spending on avoidable complications."

A Department of Health spokeswoman said that this was something they were doing.

"We agree that diabetes is a very serious illness and one that has a big impact on the NHS.

"That's why we are tackling the disease on three fronts. First, through prevention of Type 2 diabetes - encouraging people to eat well and be more active. Second, by helping people to manage their diabetes through the nine annual health care checks performed in primary care. And by better management of the condition in hospital."

Karen Addington, from Juvenile Diabetes Research Foundation (JDRF) - which was also commissioned the report - said: "It's the first time that we have been able to see the cost of the unavoidable autoimmune condition Type 1 diabetes separately.

"This is important because the causes of Type 1 and the challenge it presents are very different to Type 2, and only medical research can lift this burden on families, the NHS and the economy."

The report was authored by the York Health Economic Consortium and developed in partnership between Diabetes UK, JDRF and Sanofi diabetes.

At a separate conference in Copenhagen, the cost of diabetes has also been under discussion.

General Yves Leterme, from the Organisation for Economic and Co-operation and Development said: "Preventing and treating diabetes and its complications costs about 90bn euros (£73bn) annually in Europe alone.

"With health budgets already under great pressure and national budgets severely strained, for the sake of our health and the health of our economies we must find ways to prevent and manage diabetes in a cost-effective manner."
Posted by Talib Murad Elam at 9:54 PM